An air-source heat pump (ASHP) is a type of all-in-one heat pump that absorbs heat from a colder place and releases it into a warmer place using the same vapor-compression refrigeration process and same external heat exchanger with a fan as used by air conditioners. Unlike an air conditioning unit, however, it is able to both warm and cool buildings and, in some cases, also provide domestic hot water. Then, let’s introduce in detail what are the specific functions of ASHP?

What is the operation principle of ASHP?

How does ASHP work in extreme cold conditions?

What is the service life of ASHP?

What is the operation principle of ASHP?

Air at any temperature above absolute zero contains some energy. An air-source heat pump is a kind of all-in-one heat pump that transfers some of this energy as heat from one place to another, for example between the outside and inside of a building. This can provide space heating and hot water. A single system can be designed to transfer heat in either direction, to heat or cool the interior of the building in winter and summer respectively. For simplicity, the description below focuses on use for interior heating.

The technology is similar to a refrigerator or freezer or air conditioning unit: the different effect is due to the physical location of the different system components. Just as the pipes on the back of a refrigerator become warm as the interior cools, so an ASHP warms the inside of a building whilst cooling the outside air.

The main components of an air source heat pump are:

2. An indoor heat exchanger coil, which transfers the heat into hot air ducts, an indoor heating system such as water-filled radiators or underfloor circuits, and a domestic hot water tank. 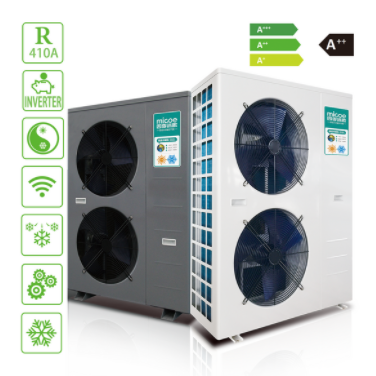 How does ASHP work in extreme cold conditions?

A study by Natural Resources Canada found that cold climate air-source heat pumps (CC-ASHPs) work in Canadian winters, based on testing in Ottawa (Ontario) in late December 2012 to early January 2013 using a ducted CC-ASHP. (The report does not explicitly state whether backup heat sources should be considered for temperatures below −30 °C. The record low for Ottawa is −36 °C.) The CC-ASHP provided 60% energy savings compared to natural gas (in energy units). When considering energy efficiency in electricity generation, however, more energy would be used with the CC-ASHP, relative to natural gas heating, in provinces or territories (Alberta, Nova Scotia, and the Northwest Territories) where coal-fired generation was the predominant method of electricity generation. (The energy savings in Saskatchewan were marginal. Other provinces use primarily hydroelectric and/or nuclear generation.) Despite the significant energy savings relative to gas in provinces not relying primarily on coal, the higher cost of electricity relative to natural gas (using 2012 retail prices in Ottawa, Ontario) made natural gas the less expensive energy source. (The report did not calculate the cost of operation in the province of Quebec, which has lower electricity rates, nor did it show the impact of time of use electricity rates.) The study found that in Ottawa a CC-ASHP cost 124% more to operate than the natural gas system. However, in areas where natural gas is not available to homeowners, 59% of energy cost savings can be realized relative to heating with fuel oil. The report noted that about 1 million residences in Canada (8%) are still heated with fuel oil. The report shows 54% energy cost savings for CC-ASHPs relative to electric baseboard resistance heating. Based on these savings, the report showed a five-year payback for converting from either fuel oil or electric baseboard resistance heating to a CC-ASHP.

What is the service life of ASHP?

Air source heat pumps can last for over 20 years with low maintenance requirements. There are numerous heat pumps from the 1970s and 1980s in the United States that are still in service in 2012even in places where winters are extremely cold. Few moving parts reduce maintenance requirements. However, the outdoor heat exchanger and fan must be kept free from leaves and debris. Heat pumps have more moving parts than an equivalent electric resistance heater or fuel burning heater. Ground source heat pumps have fewer moving parts than air source heat pumps as they do not need fans or defrosting mechanisms and are located indoors. The ground array for a ground source installation should last for over 100 years.

Air source heat pump is our life simpler and more convenient, has become an indispensable electrical appliance in our life. Its widespread use has helped many people in extreme weather. It not only regulates temperature but also provides hot water, making it a better presence than air conditioning. If you are in all-in-one heat pump and air source heat pumps business, you can consider our cost-effective products.